I was trading-in books at my local used bookstore yesterday. Julia (not her real name) is usually there to greet me ready to go through my boxes of old paperbacks in search of anything she thinks she can re-sell. Yesterday was a good day for two reasons.

First, she took a quarter of the books I brought in. A good number of the four boxes. Mission accomplished.

Second, she was excited about one book in particular that she set aside for herself. Julia said that book changed her life. That struck me as quite a statement. It was not her pattern to make bold assertions like that.

She proceeded to tell me why the Squire Rushnell book, When God Winks at You, has changed her life. She came to life as she told me story after story of "God winks” in her own life. She said that the last year and a half had been a rollercoaster and that God was helping her through it all through this book, the Lord, and her church friends.

This was unusual. I’ve been taking Julia books for 4-5 years now. She’s always friendly and helpful, though some days less chipper than others. She’d picked up from our conversations that I was “In the ministry” (her words). So when I walked in on this day, she was ready to share. But I never thought she was a Christian.

Now the part I’m a little ashamed to share, but from which I’m learning, is that I stood there listening to her share her story for at least 20 minutes. I’m not as enthused about such conversations as you might think.

That may not sound like a long time to you--especially when it’s so positive and God-honoring. (Did I say I was a little ashamed?) When you’re standing and it’s not a true conversation but more of a monologue it can get long. Add to that my default mindset (still ashamed) that I always have somewhere else to be and you have me fidgeting quite a bit.

But I settled down quicker than usual, for two reasons I think. First, God’s grace. He’s teaching me (I’m slow, admittedly) to slow down and be fully present. I did.

Second, her stories were good and her enthusiasm for God working in her life was contagious. She was genuinely encouraged and glad to see my copy of that book.

So, my first takeaway is to continue to learn to slow down and to be fully present.

My second takeaway is that it can take a while for people to warm up to you and start sharing their life with you. Remember, I had been visiting her store for 4-5 years.  We were on a first-name basis. She knew if I was coming in that it was to trade-in books.

My third takeaway has to do with sacrificial love. We’re preaching through 1 John at Grace CF right now and I challenged each person present last week to do at least one act of sacrificial love toward another Christian that week. It could be big or small, but it had to cost you.

This is one of my acts: Standing and listening to Julia (not her real name) for 20 minutes.

That’s pathetic, I know. But it makes a few points I want to elaborate on.

I wanted to move on (even though this was God “winking” at me). Ironic, I know. I was all about my agenda. I was initially bummed over the setback to my “pressing” schedule (It was not) so there was a cost associated. (Admittedly a very small cost)

But, by God’s grace, I didn’t put up a wall and cross my arms impatiently waiting for her to pause so that I could bolt. Instead, I relaxed and became more fully present. I responded with enthusiasm and listened to the end. She didn’t take a breath until the door chime signaling a new customer "broke the spell” of her dialogical riff.

My fourth takeaway is that sacrificial love doesn’t have to be huge to be costly. It cost me time and attention to actively listen to her for that long. There is even an emotional cost when you make the effort to listen sympathetically, as I did. I can quickly become exhausting for some.

My fifth and final takeaway is that sacrificial love, no matter how big, is always valuable.

The sacrifice of Jesus on the cross was a sacrifice of infinite and eternal value. In this case, the value was me valuing her as a person by giving up my time to listen to her stories. Good stories or not was irrelevant. I valued her by listening and engaging. They were good stories and so I was edified in the process. She certainly was.

Finally, a love that costs you can still include joy, even if it’s not pleasurable. I left encouraged and blessed. I received value and I believe she did too. That day, we crossed a line relationally that we’ll likely build on going forward. She talked about her divorce after 30 years of marriage, her dysfunctional friends, and, between OMGs, her personal growth in her relationship with God.

Even in light of the torment on the cross, the writer of Hebrews says that “For the joy set before him, he endured the cross scorning it's shame.” (Hebrews 12:1-3) Jesus joyfully obeyed his loving father so that he could lovingly sacrifice himself for the sins of the world. That added infinite value to my life forever. Yours too, if you believe it.

So, in the end, sacrificial love always has value. Usually, if not always, for both the giver and the receiver. That’s why God encourages it. After all, God is love.
at August 10, 2019 No comments:

Imagine if everyone walked rightly with God and with people, in peace, and in joy.  Imagine if this happened because they believed that God ... 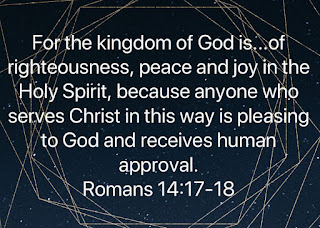